If nothing else, events in the UK since the EU referendum result on 23rd June show that politics matters. Votes can change events. In fact so rapid have been these changes, that we are in danger of unleashing political, social and economic forces that can no longer be controlled. Many are left feeling bewildered or frightened. Keep calm and carry on? Tell that to the financial markets or Parliament, both of which seem to be lurching from one crisis to another.

It would be easy to conclude that the EU referendum changed everything in the UK, that there has been a rip in the fabric that held the nation together. London is moving further away from the rest of England and Wales. Scotland is slowly, inexorably slipping its moorings and leaving the Union. The danger here is not that we see differences, but that we find such differences hard to understand. Impossible to justify. We are a polarised nation.

Given such turmoil, it would be easy to become depressed about the outlook for environmental issues and for climate change to slip down the political agenda.

This does not have to be the case. In fact the very opposite may be true. Things are changing. It’s up to us to change them for the better. In saying that, I take inspiration from the climate change documentary This Changes Everything, which was based on the book of the same title by Canadian writer and activist Naomi Klein. Climate Conversations hosted a screening of the film the week before the EU referendum (see here for details). In hindsight the timing was uncanny because the film and following discussion have a direct bearing on where we find ourselves right now.

Rather than discussing the science, the film focuses on the human impacts of environmental change and where resistance to such impacts can come from. A number of communities and issues are presented: oil spills in farmland in the USA, a coal-fired power station development in India, tar sands extraction in Canada, gold mining in Greece. While the lands and languages differ, a common feature is that the wishes, rights, livelihoods and wellbeing of local people are sacrificed in return for economic development. Capitalism prioritises cash over communities. These sacrifice zones are now in danger of encompassing the majority of the Earth given the global impacts of climate change.

What Klein argues is that effective responses to climate change can come from learning how the communities in the sacrifice zones have mobilised and pushed back. She calls this ‘Blockadia’ and references an increasing number of examples, which includes anti-fracking activism in the UK. The motivation seems straightforward. If you are looking at your village surrounded by gas wells, or your indigenous lands strip mined, your community and sense of self dislocated or destroyed, then you will resist. 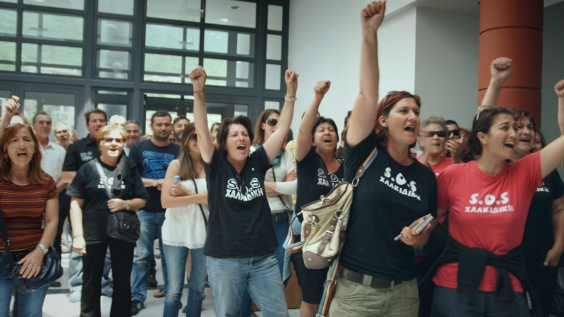 Halkidiki Courthouse.   Image: Still from ‘This Changes Everything’

The film was well received in the theatre. The was laughter. Snorts of exasperation. Some gasps. At points a fragile emotional silence. There was applause at the end. But what about those who are not interested in seeing the film or in environmental issues? The post-film discussion covered many themes, but this was a topic that was often returned to. It feels good to have your values confirmed by others, but we risk being in an echo chamber. Our voices rise louder and louder but we are only speaking to ourselves. How do we get others — let’s face it, the majority of the UK population — engaged in the conversation?

If we are going to produce effective responses to major challenges such as climate change, then there must be a majority behind such efforts. In order for that to happen, we must connect climate change to the concerns of not just the ‘greens’ and those who have long argued for environmental issues but to people who are more concerned about jobs, housing, education, healthcare and sometimes immigration. It is often assumed that these will be at odds with attempts to reduce environmental impacts. That’s not the case. In fact the very opposite can be true.

Ecological footprints generally become larger with wealth. It’s those with least money who will typically have the smallest environmental impacts. They also pay a larger proportion of their income in taxes than those with much higher salaries. They are paying their fair share while not taking too much from our shared environmental resources. So their contribution to the problem of climate change is small, yet they will be most exposed to the coming environmental and economic storms. That’s the case in Southampton and other cities and communities across the world.

This is profoundly unfair.

Here are two local examples. The very poorest in UK cities breathe the most polluted air. Air that in Southampton leads to potentially over 200 premature deaths a year, and blights the lives of many others. Fuel poverty is also a serious problem in our city – damp, poorly insulated and cold housing is associated with mental health problems and was responsible for 100 excess winter deaths in 2010/2011. Tackling both these issues would improve people’s health, their quality of life, stimulate innovation and economic activity, and reduce greenhouse gas emissions all at the same time.

It’s challenges such as these that we should be championing. In doing so it would demonstrate that increasing the quality of people’s lives doesn’t have to come at the expense of the planet. In fact, in many instances, your health and happiness will be strongly determined by the quality of your environment. Liveable cities will be low carbon cities and the payoff as we make progress towards them can be appreciated immediately.

In politics, people sometimes talk of rainbow coalitions, a government that is comprised of different political parties. If we as a city, a nation, and as a species, are going to avoid dangerous climate change, then we must produce coalitions of the greatest diversity. Rainbows across the political and social spectrum.

Right now, that may be hard to imagine. But common ground can be found. To a certain extent that is an article of faith, but one that should serve us well in the challenges ahead. In this endeavour we would do well to remember the words of the late Jo Cox MP:

“We have far more in common than that which divides us.”

Climate change has the capacity to change everything we care about and in doing so fundamentally change our societies. Let us make societies that reflect our shared values of tolerance, compassion, and respect, and in doing so make them better.