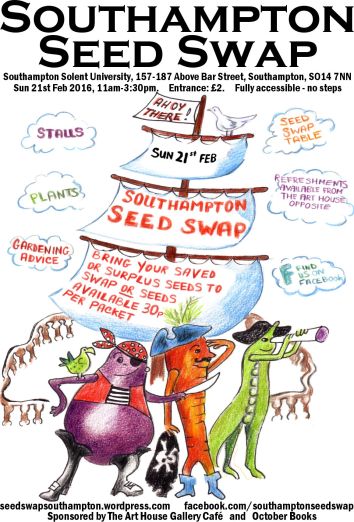 On Sunday 21st February gardeners across Southampton will be coming together to help protect biodiversity and tackle climate change. The event? The 9th annual Southampton Seed Swap! (157-187 Above Bar St, SO14 7NN). Got green fingers, want to try a growing a new kind of vegetable or just want to meet kindred spirits? Come along and be part of the local food-growing community.

Growers can choose seeds from dozens of traditional varieties of garden vegetables in return for a donation or in exchange for seed they have saved. It’s also a great place to meet likeminded people, from newbie gardeners to people who have been giving away free courgettes by the tonne for years!

The Southampton event was inspired by Seedy Sunday in Brighton and has been running since 2008. The aim is twofold: to protect diversity within our food supply but also to resist control of the seed supply by just a few large companies. Seed swapping is also very important in terms of ensuring food security and adapting to climate change. Greater diversity in our food supply means our regional seed systems are healthier and they have the chance to adapt if a disease strikes a particular crop.

If you’ve been inspired and want to find out more, why not meet up with Groovy Growers? This is a circle of food growing buddies who meet monthly at The Art House to share ideas, discuss seasonal projects and just enjoy a cuppa with other people who are passionate about food growing! If you are interested in growing veggies, herbs and other edible plants organically – on whatever scale from one pot of herbs to a garden or allotment – please do join us!

The next Groovy Growers event is on Thurs 18th February 7:30pm – a double bill of Seedy Films – Seeds of Freedom and Seeds of Justice, which explain in more detail why it is so vital to support food sovereignty. 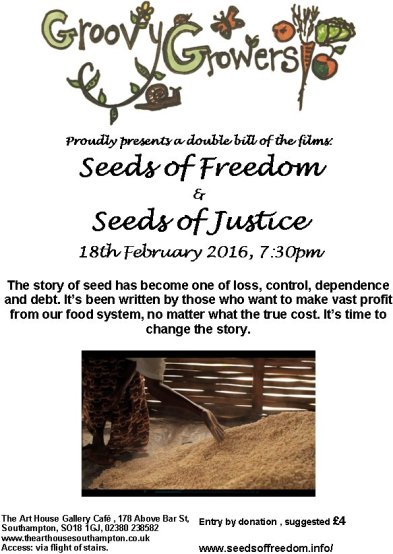 A seedy business
People have been saving and swapping seeds for crops since the advent of agriculture and food growing. Varieties of different crops were nurtured to grow well in their local conditions, making for a diverse palate of food crops throughout the world.

During the latter part of the last century in particular, farming became increasingly industrialised and mechanised. Such methods, together with the advent of genetically modified (GM) seeds, has had a huge impact on biodiversity within agriculture across the world.

It is now possible for a powerful corporation to patent micro-organisms, which when introduced to the genetic material of a seed means that that crop can be patented. Farmers across the world have suffered from accusations of seed piracy – a famous case involved the company Monsanto and pollen from its Round up ready canola (rapeseed) mingling with farmers’ crops.

Back here in the EU, there is a list of ‘official’ vegetable varieties, together with a law restricting seed sellers from marketing seeds which are not on that list. Luckily gardeners can still buy seeds which are not mentioned on the list and do whatever they like with the produce.

On the flip side, according to Ray Warner of Thomas Etty seeds, there is more consistency with varieties – there is much less risk of people being sold a variety that is not actually what it says on the packet resulting in disappointment for the grower. Also he has contacted numerous seed merchants and the biggest risk to the loss of diversity is not, as is often thought, because of heavy handed regulations but the fact that if people don’t buy the variety, they have to drop the seed from their catalogues as there is a flat rate for keeping seeds.

But there is hope… Garden Organic’s Heritage Seed Library has the aim of making rare varieties available to its members. These include rare landrace varieties, heirloom crops and types of seed that are no longer stocked by popular seed catalogues. If you’d like to find out more about the HSL click here.

And for a spot of further reading (may we suggest via either your local library, local bookshop or Hive) here are some recommendations:
Seed Swap by Josie Jeffery (this is what inspired Ziggy to set up Groovy Growers) and
Heirloom Plants by Lorraine Harrison & Ray Warner

This work is licensed under a Creative Commons Attribution-NoDerivatives 4.0 International License.

3 thoughts on “Seeds of Change”